Today was about going the quickest way to Ingleby Cross, no frills and all roads. After yesterday’s mammoth route which had EVERYTHING from mountains to off road and distance we were quite content with just getting to our next destination. We were still pretty tired and could do with not taking to too hard and understanding that we still had to do the run back yet so why punish our bodies now? We saw a lot of beautify sights yesterday so as I said we were quite happy indeed to just get there via the fastest route possible.

Still, this turned out to be pretty scary and worrying at times as we hit the A66 for 30 miles of the route and we had the tiniest cycle lanes with lorries going past us about 70mph missing us by only a few feet. Now I look back perhaps this route wasn’t ideal – especially on mountain bikes where there simply was no momentum on the roads and not much going compared to a road bike.

We set off from Kirkby Stephen and came down The Muge Hill that Aidy and I struggled with right at the end that we pushed our bikes up. I hit 41mph, by far my fastest ever bike speed (36mph previous) and we were on our way to the A66……

This bit, as I’ve said already, was scary, worrying, boring – just cycling up a huge road, sometimes being beeped at by lorries etc knowing how close they were to us. At one point one of the lanes on the dual carriageway was closed for roadworks and Aidy decided to cycle in this closed off cones off lane – which made the lorries even more angrier with me on the other side in the cycle lane. Now we look back at it YES we were a bit silly but we felt safe enough and there was absolutely no other way to Ingleby Cross apart from tackling the huge hills over The Moors.

We saw signs all the way down the A66 for Scotch Corner. What the heck was Scotch Corner we asked ALL THE WAY down the A66 until at last we came off the A66 at Scotch Corner which was simply where the A66 met the A1 and had a few service stations – we then hit country roads – this was a good feeling knowing we were only around 10 miles from our destination. We arrived in Ingleby Cross just before 6pm which was fantastic and we made our way up the huge hill to the beautiful Park House B&B which sat high up in the woods looking down with a fantastic view.

When we arrived straight away we were greeted and treated like kings. Our bikes were taken away for us and we were made to feel relaxed by Beverley. Shortly afterwards Mike took our bikes to the garage and then showed us to the workshop where he has a dozen amazing bikes on display, each one costing more than both of ours put together. Mike found it amusing that we were attempting the C2C just using mountain bikes.

An hour later tea was served which was of course a Sunday Roast with Yorkshire puddings almost the side of your head with beautiful meats etc. We were also joined by four C2C walkers, two of which were Australian (perfect for Aidy) and another guy from FARNWORTH??? Small world. We then retired in the lounge area with a few beers and called it a night around 10pm.

Summary: Beautiful B&B and the last fifth of the route was most enjoyable – the rest rubbish lol but it wasn’t so tough and felt better than we did at 12am at the end of Day 1. 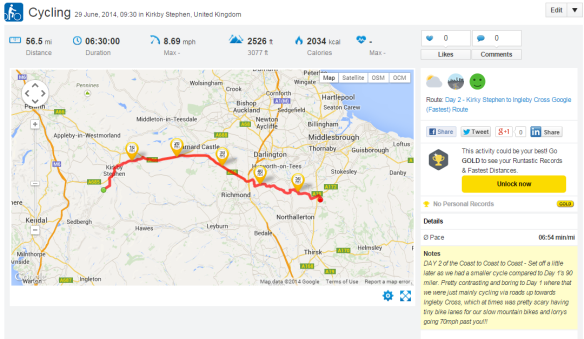